View basket “Nissan Sticker Pack – Save 25%” has been added to your basket.

If you look back at photos of Japanese racers from the glory days of Fuji and Suzuka, you’ll notice a stylized, pinkish-red hand, forefinger and thumb making a perfect circle — the internationally recognizable “OK” gesture. But what does it mean?

It was the logo for the Okamoto Rubber Manufacturing Company, which was and still is Japan’s largest manufacturer of condoms. Okamoto knew its market well, and realized that the only thing young males love more than cars and motor racing is sex.

Of course, young men don’t like being preached to, hence some versions of the logo accompanied by the words “Safety Drive,” an inside joke encouraging them to drive safely both on the track and, um, off the track too. And when you look at it that way, the hand symbol takes on a whole new meaning.

Though it’s most closely associated with the hakosuka Skyline GT-R, nearly every marque that competed in Japan’s varied and prolific touring car races carried an Okamoto decal at one point or another.

There are no reviews yet.

Only logged in customers who have purchased this product may leave a review. 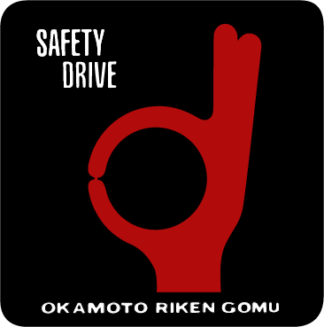